Ted and his crew began work in November.  Historically, November has been the wettest month for Seattle. True to the NW climate, it rained heavily for days. The side yard turned into mud.  Watching your house being torn apart in the pounding rain, on a dark grey day is not for the faint of heart.   I could barely watch…Ted and his crew took apart the blue and pink sidings and the decorative fish scale.  They carefully saved all the lumber from the interior framing.  What can’t be saved went into the Hungry Buzzard Recovery bin on site. The company, based in Millcreek, will pick up co-mingled loads of construction material for recycling, for a cost of course.  Recycling does have its price.

When all the interior walls were removed I was pleasantly surprised to find how spacious the house became.Ted and Parie had decided that removing three walls and using Structural Insulated panels (SIPs) would save money and time.  The panels have a core of rigid foam insulation sandwiched between two oriented strand boards (OSB). 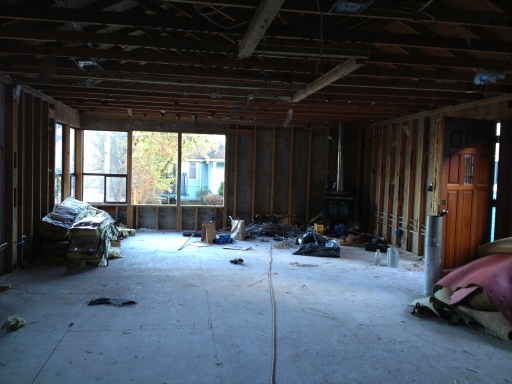 Spaciousness exposed after the interior walls came down. 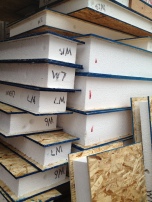 Supposedly it is one of the most environmentally responsible building systems available that also provides a super strong and tight envelope. The envelope is the key in an energy efficient home.  It doesn’t make sense to have a high price, highly efficient heating system if the home leaks.  An energy audit will access where the leaks are and where to best spend your money to upgrade your efficiency.  Puget Sound Energy offers $350 off the price of an audit, and
Seattle City Light has one for just $95.  Bob Thoreson of HomeRX did mine via a program with Community Power Works, which offers various rebates for home energy upgrade.  Yes, the envelope please.

As Ted and crew continued to deconstruct my house, I continued to give away, sell or recycle.   All the stuff Second Use or Habitat would not take, Craigslist assisted. The 2012 King County/Seattle Construction Recycling Directory also came in handy.  In it I found Pacific Urethane Recycling in Kent, where I dropped off seven large bags of foam carpet padding.  These will be given another life as new carpet padding.  I was particularly proud of that since I was told by many that no one wants old foam! 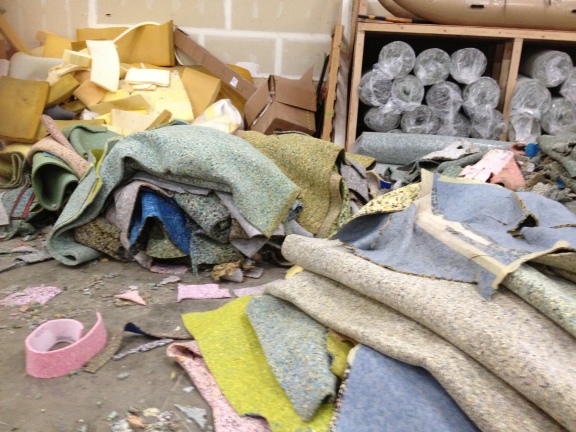